29Dec11 (Abbie 8.5mths) was the 1st time I introduced egg york for Abbie. Of course I made use of this opportunity to let her explore “the egg” and let her tried to feed herself.^^ 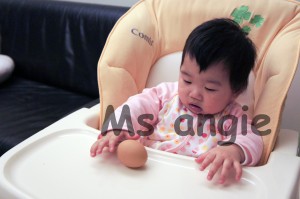 I boiled an egg and put in front of her. “Look! Abbie, this is a boiled egg.” I said.
I let her spend some time to touch/feel/ lick and roll the egg, in general to give time to the young children to explore by themselves. 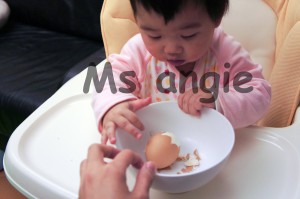 Then I peel the egg in front of her and tell her that we should peel an egg before eat. And let her observe the difference between before and after peeling. 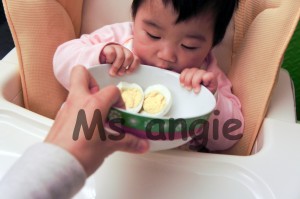 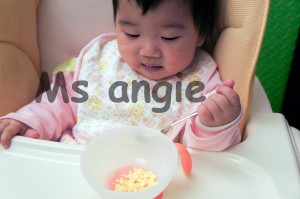 I explain to Abbie”This is a bowl with egg york and this is a spoon. And we use spoon to put food in our mouth……” 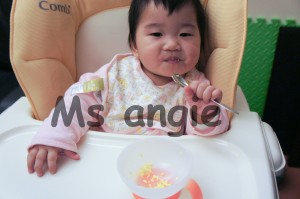 We have a very good beginning and she seems know how to hold the spoon then put spoon into mouth. 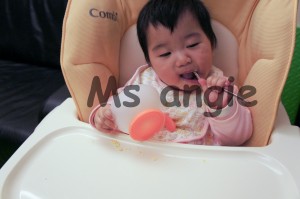 However, just a while Abbie grabs the bowl with the other hand also she starts to chew the spoon. 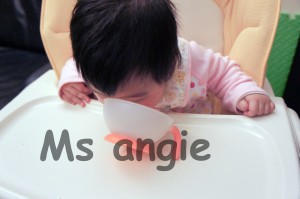 Finally, she puts her face into the bowl then start to lick the egg york^^’.

Well what I say is “good try”!

To summarize I apply Montessori teaching method use the real object to introduce its names. (Lauguage) and let the children to learn through 5 senses.
I have her to learn feed herself at least try to do it instead of just feed her directly.

Of course, parents should let their young kids try to feed themselves as soon as they are eager to do it and tolerate those messy situation.
And you can start with the solid snack (food that not hot)!

“Early Childhood is the foundation on which children build the rest of their lives. And I believe learning can via many different ways to explore and experience. It is so much fun when seeing the children finds their ways to learn and love to learn which drive me to keep the passion on working with children.”
View all posts by Angie Chan →
This entry was posted in 6-9mths activities 6-9個月活動, Montessori 蒙特梭利. Bookmark the permalink.