Weekly Letter Sound a for ants, apples and Abbie 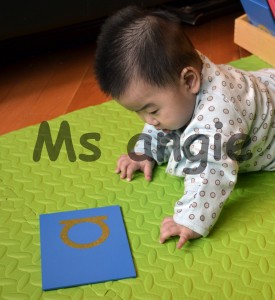 I put the sandpaper letter in front of her after introduction. 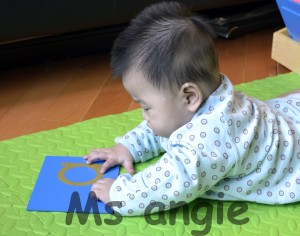 Haha, she then trace the sandpaper letter by herself. The way that she traces is similar how I trace with her.

After that I put the sandpaper letter on the mat and I let her explores the letter.

I didn’t use the Jolly Phonics Song because the words arm DJ [ɑ:m] and alarm  [əˋlɑ:m] which are different from the sound ant  DJ [ænt]

“Early Childhood is the foundation on which children build the rest of their lives. And I believe learning can via many different ways to explore and experience. It is so much fun when seeing the children finds their ways to learn and love to learn which drive me to keep the passion on working with children.”
View all posts by Angie Chan →
This entry was posted in Montessori 蒙特梭利, Phonics Teaching 英語拼音教學. Bookmark the permalink.