This week I introduced the letter ‘t‘ to my darling daughter Abbie. I put all the things I have related to the ‘t’ sound in the basket. 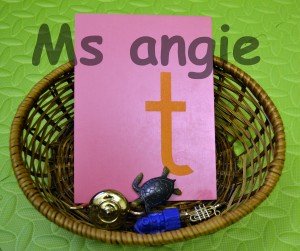 Then I took Abbie to the shelf where the material was kept and I placed the basket on the mat. 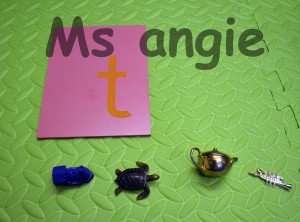 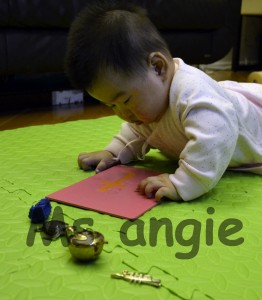 I also show the small objects which begin with the sound /t/.Then I introduce to Abbie one by one. 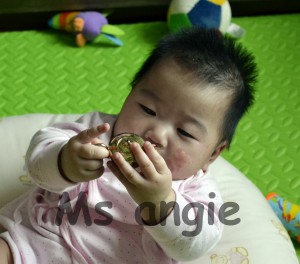 (Remark: Young children like to put things into their mouth, so if you are going to use the same way to introduce objects, you must keep an eye on your chlidren. Don’t let them swallow the tiny objects!)

Moreover, I brought Abbie in front of the table, television and telephone which are household objects begin with the sound /t/ and I say the name of those objects.

*This time I monitored Abbie how to work with the sandpaper letter. She loved scratching it (both hands) and then licking ^^ *

“Early Childhood is the foundation on which children build the rest of their lives. And I believe learning can via many different ways to explore and experience. It is so much fun when seeing the children finds their ways to learn and love to learn which drive me to keep the passion on working with children.”
View all posts by Angie Chan →
This entry was posted in Montessori 蒙特梭利, Phonics Teaching 英語拼音教學. Bookmark the permalink.